Wazifa to be recited 3 times morning and evening
for then by  the leave of Allah NO Harm will come to the reciter inshallah.
below is the arabic with extra protection duas added on by me Muhammad Sajad Ali. 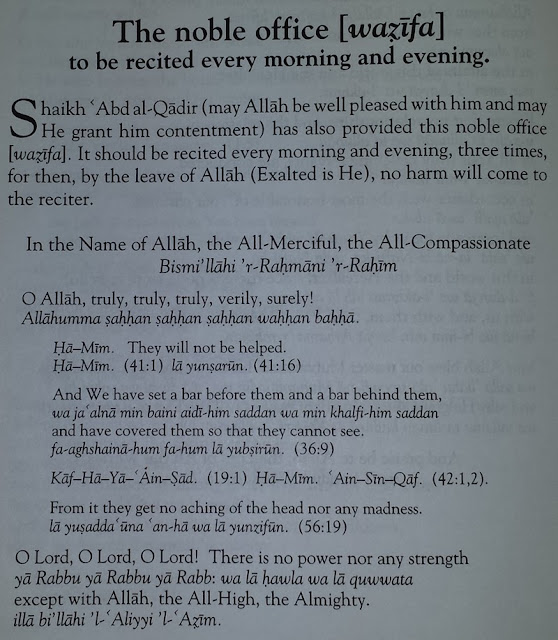 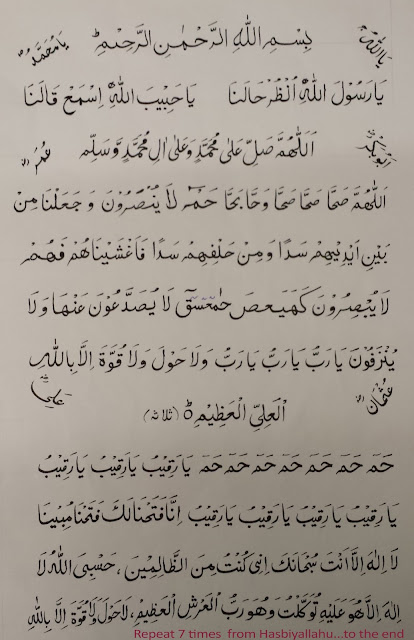 The arabic version has an extra ending adding in by me (Muhammad Sajad Ali) and starting calling in which  the Help of the holy Prophet (peace be upon him) is asked upon as given by  Shaykh 'Abd al-Qadir Jilani  and then ends with 7 Ha-meem ( this is a protection and taken from Hizbul Bahr see link 7 Ha-meem)  then 7 Ya Raqibu: Allah is Ar-Raqib: meaning, the Ever-Watchful The Watchful, He who observes all creatures, and every actions in under His control.

Ya Raqibu: O Watchful One! Allah's protection is assured to those who invoke this Name seven times, over themselves, their children, their families and their property. Anyone who desires that his family and wealth be protected from destruction and calamities  they will be protected by Almighty Allah and will not be destroyed. Ya Raqibu  should repeat this Ism each day 7 times and blow on them. He should also continue reading at all times so as to remain safeguarded at all times.Any person who reads this name 7 times for his family members God will alwaysprevent them with all the mishappenings.

If recited 7 times on any movable or immovable property or one family members, . This name is also effective for achieving peace of mind and the person will become careful on his/her affairs. If recited on any eatable oil and that oil is applied on boil, it will be cured Insha Allah. If anything is lost this Holy Name is recited 312 times, the lost thing will be recovered Insha Allah.

Description: Allah is Al-Raqib, Allah watches over any and everything. This means two things: Allah watched over us so he knows everything about us and because he knows everything about us, he will judge us by what he knows about us. We can’t run away from him or hide from him. This may scare people but the second meaning defines Allah as the one who protects us. The who watches over us to protect us from enemies and ourselves and Allah’s protection can come in many forms.

Allah does not only watch the bad things we do but the good things we do. Allah knows if we tried our best or not. In High School you can be a top student but if you fail the Exam with a , everything you worked for would be trashed. This is not the case with Allah, Allah sees all the hmwk we do. Allah is Ash-Shura, and appreciative of everything we do.
"… Allah is watchful over all things" (33:52).

As for line "Inna Fa-tahna laka fath-hum-mubeena". meaning "We have surely given you a signal victory (48:1)"  That person will receive a guarantee of safekeeping for the whole year. So read it frequently if recitied in Shahr Ramadhan and also hold properties of protection if recited everyday too.  Then Ayatul Cream or verse of Distress, and then followed by 7 times 'Hasbiyallahu la ilaha illa Huwa 'alaihi tawakkaltu wa Huwa Rabbul 'Arshil ‘Adheem’  meaning: "Allah is sufficient for me; there is none worthy of worship except He. I have placed my trust in Him and He is Lord of the Majestic ‘Arsh [the Throne].  Hadith says “Allah will grant whoever recites this seven times in the morning or evening whatever he desires from this world or the next."

La Hawla wa La Quwwata Illa Billah -There is neither might nor power but with Allah)
The magnificent phrase la' hawla wa la' quwwata illa' billah is mentioned numerous times in the hadith (sayings of Muhammad  peace be upon him) as being highly regarded and highly recommended by the Prophet Muhammad peace be upon him.  Allah had ordered His angels to say "La Hawl Wala Quwutta…" in order to be able to carry the throne of Allah which they could not have been able to otherwise. Meaning its power is used to carry problems or burdens of lifes as well as being a powerful protection against enemies.

It is also reported that ‘La hawla wala quwwata illa billah is a remedy for 99 ailments/problems, the least of  which is sorrow.’ It is a remedy for sorrow because grief mostly occurs when one misses something  one loves, or when a distressful thing occurs; and whenever either of these things occurs people  perceive their helplessness and inability to achieve their desired aims; hence they feel sorrow.