In composing their own odes of praise on the Prophet Salla Allahu 'alayhi wa Sallam awliyaullah have been inspired directly from the heart of Sayyidina Muhammad Salla Allahu 'alayhi wa Sallam or by seeing a vision or dream in which he informed them of the value of a particular praise or recitation. In the case of this particular du'a, which was composed by Sayyidina Ahmad al-Badawi QaddasAllahu sirrah, it is related in Talkhis al-ma'arif fi targhib Muhammad 'Arif by Hasan ibn Muhammad Qahhi, that the wali Muhammad Talmaysani QaddasAllaahu sirrah recited Dala’ilu ’l-Khayrat 100,00 times. After completing 100,000 recitation the Prophet Salla Allahu 'alayhi wa Sallam came to him in a dream and said to him, “If you read the recitation of Ahmad al-Badawi-(known as Šalawat Nuraniyyah or Šalawat Badawi Kubra.) it would be as if you read Dala’ilu ’l-Khayrat 800,000 times.” 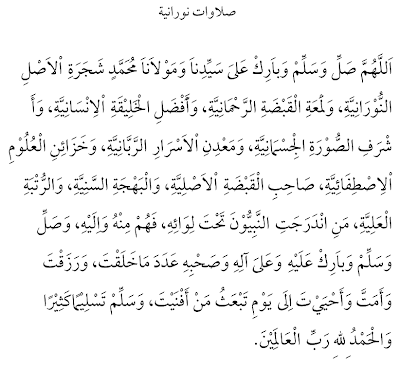 
Salawat Nuraniyyah / Salawat Badawi Kubra
O Allah! Bless, greet and sanctify our master and liegelord Muhammad, the Tree of Original Light, the Sparkle of the Handful of Divine Mercy, the Best of All Humankind, the Noblest of Physical Frames, the Vessel of the Lord’s Secrets and Storehouse of the Sciences of the Elect, the Possessor of the Original Divine Grasp, Resplendent Grace, and Uppermost Rank, under whose flag line up all the Prophets, so that they are from him and point to him. Bless, greet and sanctify him and his Family and Companions, to the number of all that You have ever created, sustained, caused to die, and caused to live again, to the Day You resurrect those You reduced to dust, and greet him with an abundant and endless greeting. Glory and praise belong to Allah, the Lord of the worlds!

Giving Sadaqah will help with Duas being answered, Sins be erased and sicknesses are sometimes due to sins; Showing gratitude is sunnah and Allah loves those slaves who shows gratitude; gratitude earns more (ziyada) favours from Allah, Allah promises increased favours for those who are grateful and (hates misers see hadith below) "And when your Lord proclaimed: "If you are thankful, I will give you more"(14:7) and "We shall reward those who are thankful" (3:45)  Allah informs us that one of Satans primary objectives is to prevent humans from being grateful. So show you  support be Thankful for these Duas and Khidma and take more rewards from Allah by Helping and Support “The Sufi Healing Project” through Uns Foundation and take the barakah of this site and all the people who read its duas too through Sadaqah Jariyah.


Supporting Uns Foundation with Sadaqah
Why is Sadaqah Important - Sadaqah extinguishes sin as water extinguishes fire
Why is it so important to give Sadaqah even a little  as £1 or £3 or more a month
Posted by Unknown at 06:05