Duas for Difficulties, Ism Adham-'Allah’s Greatest Name' and Secrets of Ya Hayyu Ya Qayyum

Anas ibn Malik (Allah be pleased with him) relates that if any distress befell the Prophet (Allah bless him and give him peace), he would say: Ya Hayyu Ya Qayyum, bi-Rahmatika astagheeth (‘O Living, O Sustaining, in Your Mercy I seek relief!’).

Translation: Oh Allah, there is nothing made easy except what you make easy, and you make the difficult easy, if you wish. (Ibn Hibban and Ibn As-Sunni)

I was just asked a question which i will share with you all, were is Ism Adham-Allah’s Greatest Name or hidden name, in the Quran, when Allah’s greatest name is used in supplications by Allah He grants the prayer-dua, it’s said (from many Hadith) it is found in three Surahs in the Quran:


The Virtues of Ayatul Kursi-(Verse of the Throne)

"Whoever recites Aayatul Kursi after every obligatory prayer nothing except death prevents him from entering heaven." (That is say that the only thing that is preventing him from entering heaven is death. When it will come, he will go straight into paradise). Abdur Rahman ibn Awf radiyallahu anhu used to enter his house, he used to recite Aayatul Kursi in all four corners of the house, to keep satan away.

A piece of extra info which has come to my heart if there is a jinn in that house or evil thing you MUST leave either the door open or window open as they need an exit to leave the house when blowing into the four corners of the house also  blowing isn’t mentioned but that also needs to be done in each corner  too.

So you need to read in each main corner of the house Ayatul Kursi and blow in all 4 corners and leave a window for the thing to escape the house otherwise it will be trapped and may cause more trouble.

"Whoever prays at night ten verses of Surah Baqarah the devil will not come to that house until morning: Its first four verses, the Throne and the two verses following it and its last three verses, the first being lillahi maa fis samaawaati."

"Allah Ta’ala finished Surah Baqarah with two verses which I have been given from His treasure which is under the Throne; so learn them and teach them to your women-folk for they are a blessing, a means of approach (to Allah Ta’ala) and a supplication."

Abu Hurairah reported that whenever the Prophet, peace be upon him, was faced with a serious difficulty, he would raise his head to the sky and supplicate, "Subhan-Allah al-'Azim (glory be to Allah, the Mighty)." And when he implored seriously and strongly, he would say "Ya Hayyu, Ya Qayyum" (O Ever-Living One, O Self-Existing One).(Hadith of Tirmidhi)


Dhikr of reviving the Heart: “Ya Hayyu Ya Qayyum, la ilaha illa ant”

A saying of Ahmad b. Taymiyya which his student Muhammad b. al-Qayyim (Allah have mercy on both of them) relates in two of his books: Madarij al-Salikin and Tariq al-Hijratayn, in which he says that reciting “Ya Hayyu Ya Qayyum, la ilaha illa ant” every day 40 times after praying the Sunnah of Fajr and before the Fard “revives the heart” and “has an astonishing effect” respectively.

Another Prophetic Supplication used by Prophet Yunus (a.s) for Trials Called Ayatul Cream or the Verse of Distress.

The Prophet (peace and blessings be upon him) said, “The supplication of my brother Dhun Nun (Yunus, peace be upon him), who called on Allah while in the whale’s belly: ‘There is no deity but You. Glory be to You! Verily, I have been among the wrongdoers’ (Quran 21:87) – no Muslim person says it, for any situation whatsoever, except that Allah Most High answers his call.” [Tirmidhi]

La ilaha illa Anta, Subhanaka, inni kuntu mina z-zalimin.
There is no deity but You. Glory be to You! Verily, I have been among the wrongdoers

Combining the secret of Dua of reviving the heart and Ayatual Cream as used by Qadiri-Noshahi tariqah: Ya Hayyu Ya Qayyum with  La ilaha illa Anta, Subhanaka, inni kuntu mina z-zalimin.

Powerful Supplication for Trials, facing serious difficulties stress or afflicted in any worry or concern From the Secrets of Ya Hayyu Ya Qayyum;
This is a Hidden Qadiri-Noshahi Dua which I will share never ever before posted anyway were on the internet.

Note arabic typo-bi-haqqi
Ya Hayyu Ya Qayyum bi-haqqi La ilaha illa Anta, Subhanaka, inni kuntu minaz-zalimin.
O Ever-Living, Oh Self-Existing for the sake of There is no deity but You. Glory be to You! Verily, I have been among the wrongdoers.

Ya Hayyu ya Qayyumu, ya Badi’as samawati wal ardi, ya dhal-Jalali wal Ikrami (Thrice)
O Ever-Living, O Self-Subsisting! O Primal Origin of the Heavens and the Earth! O Possessor of Majesty and Honour!

O Allah, by the sanctity of Imam Hasan, his brother [i.e. Imam Husain], his grandfather [i.e. Prophet Muhammad, Allah bless him and give him peace], his father [i.e. Imam Ali], his mother [i.e. Lady Fatima], and his progeny – deliver me from the sorrow that I am in. O Ever-Living, O Self-Subsisting! O Possessor of Majesty and Honour! I beg You to revive my heart with the light of mystical intuitive knowledge of spiritual truth [ma’rifa], O Allah! O Allah! O Allah! O Essence of Mercy!

As for mentioning ya dhal-Jalali wal Ikram this is a sunnah recite it abundantly. 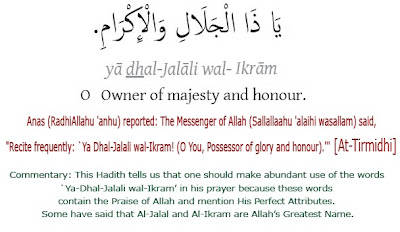 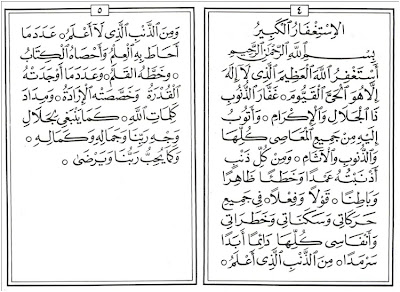 
Translation of Istighfar al Kabir:
I seek the forgiveness of Allah the Great, there is no god save He, the Living, Sustainer of Life, the Forgiver of sins, the Majestic and Generous. And I turn to Him in repentance from all acts of disobedience, and all sins and offenses. From every sin that I have committed intentionally and unintentionally, openly and in secret, in word and deed. In my every action and my every stillness, my every thought and my every breath, always and forever and eternally. From the sin that I am aware of and the sin that I am unaware of. To the number of all things contained in His knowledge, registered in the Book, written down by the Pen, and to the number of all that His omnipotence has created, and His will chosen, and as much as the ink of Allah’s words. As it befits the Majesty of the Face of Allah, and His Beauty and Perfection, and as our Lord wishes and as He pleases.

Its Merits:
Shaykh Ahmad ibn Idris wrote about the Istighfar al Kabir: “I sent it to one of the awliya-(Saints), so he wrote me a letter in which he said: ‘I read the istighfar that you sent me one time  and Allah forgave me allmy sins so that nothing of them remained.’ And this means that he knows that Allah forgave him, a real and true knowledge, otherwise how could he have said: ‘He forgave me’?

The salawat above of Shaykh Ahmad ibn Idris called "Istighfar al Kabir-The Magnificent Forgiveness" giving taught to him by Sayyid Al-Khidr and this happen Shaykh Ahmad ibn Idris, may Allah be pleased with him, had a meeting in the waking state, with the Prophet Muhammad, salla Allahu alayhi wa Alihi wa sallam, and al-Khidir, alayhi assalam. The Prophet said to al-Khidir: “Ya Khidir: teach him that which joins together all of the dhikrs, salawat, and prayers for forgiveness of sins, and is superior in reward, larger in number, more exalted in worth, and greater in obtaining assistance.”

Al-Khidir, alayhi assalam, said: “What is that, oh Prophet of Allah?” And so the Prophet, alayhi assalatu wassalam, taught him the Idrisi Tahlil, the Salaat Azeemiyya, and the Istighfar al-Kabir".

Here i have only mentioned Istighfar al-Kabir as for the Idrisi Tahlil, the Salaat Azeemiyya i will mention that in another post with full commentary too, the above starts at the beginning asking Allahs Forgiveness and the salawat below known as salawat Uwais, Allah is sought for this forgiveness through the same line but it appears at the end of salawat Uwais.

Meaning: Oh Allah, bestow Your Choicest Blessings upon our Master Muhammad (Peace be upon Him) and upon his extended family and his progeny according to the number of all things known to You. I seek the forgiveness of the One but for whom there is no God, The Truly and Perfectly Alive and The Self Sustained and I turn to Him with repentance. O The Truly and Perfectly Alive O The Self Sustained.
It is highly recommended that those who seek the love and closeness to the Beloved of Allah, Hadrat Muhammad (Peace be upon Him) make it mandatory upon themselves to recite this Durood Shareef according to their capacity and the time they have available. For instance at least 11 times after each Salat. It should be recited more frequently after Isha, Tahajjud and Fajr. 100, 300, 500 times or even more. Remember though, once the frequency is fixed, be steadfast upon it! -  Taken from - from Shaykh Hazrat Abu Anees Sufi Muhammad Barkat Ali.

Giving a small amount of sadaqah monthly is continuous giving which is most beloved deed before Allah. Everyday 70 problems come our way and Sadaqah is a shield to protect yourself and your family. The most beloved deed before Allah is that which is continuous, even if it is little. The constant giving of a little is said to please Allah more than the occasional gift of a lot. So if it’s in your means to donate a small amount of £11 or more a month and Support “The Sufi Healing Project” through Uns Foundation.